Glasgow is a cultural melting pot with a rich variety of theatres spread across our fair city. We’re spoilt for choice – with umpteen national and international performances of music, drama and dance taking place from big budget productions to smaller, quirky independent offerings.

We at the Embassy have listed some of our favourite theatre haunts. Read on below to see what takes your fancy. To make your theatre jaunt that bit more appealing, we are running an offer which entitles you to 10% off your room rate if you’re attending a show! 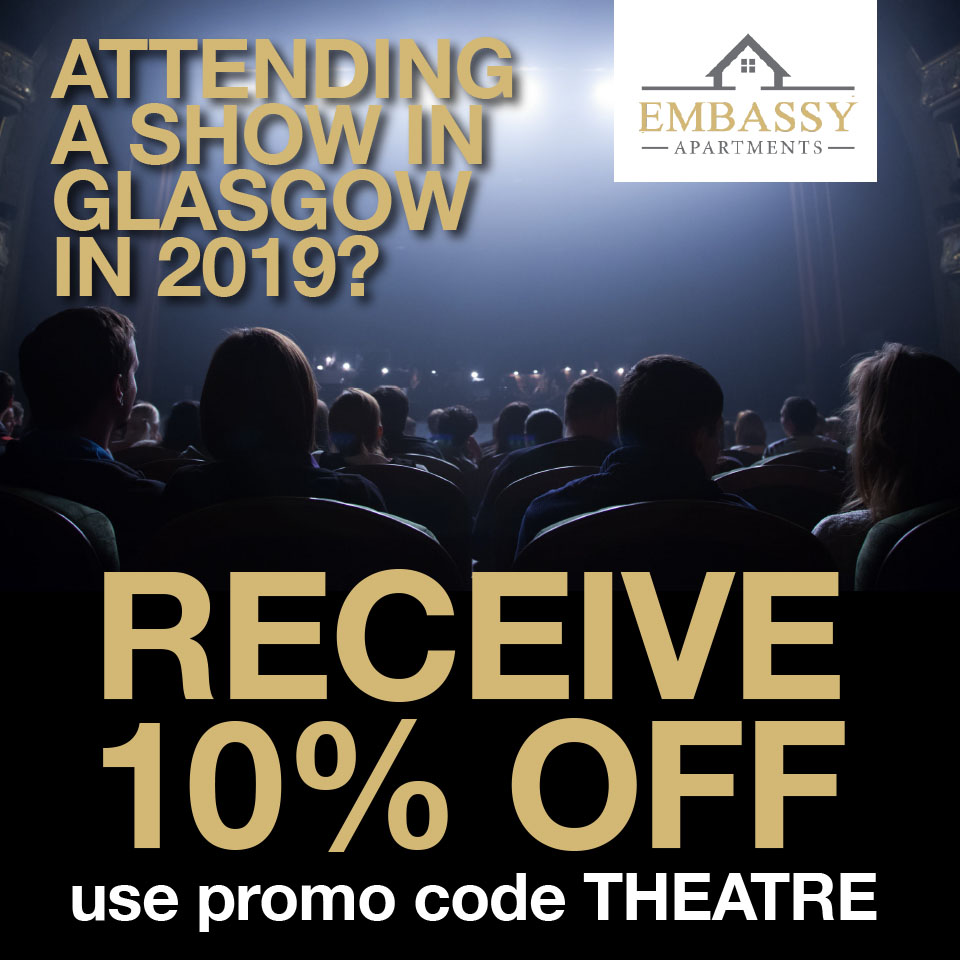 Kings Theatre
Opened in 1904, it’s stunning design is a much-loved Glasgow landmark and institution, playing host to big showbiz names and shows ever since. The stamping ground to the ultimate Christmas pantomime, which has seen the likes of Scottish treasures including Stanley Baxter, Rikki Fulton, Elaine C Smith and Gerard Kelly, it’s a must for theatre
buffs.

Pavilion
Opened in 1904, the Pavilion is a statuesque structure with all the bright lights that go along with this variety performance venue. You’ll find something for everyone and all ages. Renowned plays here have included “The Steamie” and “The Sash”. If you’re a bit peckish there’s plenty of excellent eateries nearby.

Websters Theatre
In the heart of the West End, this charmingly haunting A-listed Gothic Revival Church was originally erected in 1863 and featured stained glass windows by Alf Webster, the theatre’s namesake. Transformed into a 182 seat theatre, it puts on a terrific assortment of performances to indulge all interests. Choose from dramas, musicals, stand-up comedy and much more. It also has a bar and bistro for pre-theatre treats!

Oran Mor
What can we say? You must visit Oran Mor – a unique arts and entertainment spot, a stones throw from us, which offers a Victorian Bar and Whisky Bar, two restaurants, a night club and live music all under a magnificently ornate auditorium with mural ceiling. But there’s more – you can still get your theatrical fix in the form of the internationally famous “A Play A Pie And A Pint”! showing Monday – Saturday 1pm.

Cottiers Bar, Restaurant and Theatre
If you prefer unorthodox,try a truly unique theatrical spot presenting all kinds of events from traditional stage plays to live music and stand up comedy. Quaint surroundings set the mood in the form of elaborate stained glass and ornate wood. Enjoy performances like The Medieval Banquet at Cottiers – a medieval themed hog roast banquet with costumes strongly encouraged!

Byres Road – The heart and soul of Glasgow’s West End

A visit to Byres Road during the day is a completely distinct experience than by night, and that’s why we love it so much. Byres Road can reinvent itself like no other street in Glasgow with such ease.

Glasgow’s Hop-on Hop-off Sightseeing bus is a fantastic and cheap way to see the city.

The Edinburgh Festival Fringe is the world’s largest festival showcasing an extraordinary collection of cultural and artistic performances every year in August.

The Embassy Apartments is part of the McQuade Group